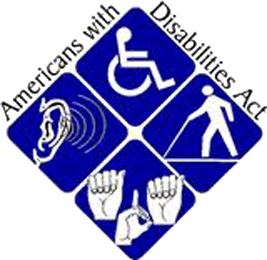 Agendas are available prior to the meetings.

Most Recent Agenda | View All

Meeting Minutes
Minutes are available before the date of the next meeting.

Most Recent Minutes | View All

Each year, the ADA Advisory Committee presents a report to City Council.

Most Recent Report | View All

The Pueblo ADA Advisory Committee is comprised of 15 volunteer members who must reside within the City of Pueblo. These members are appointed by the Mayor. The chair, vice-chair, and secretary are elected internally by the committee itself.

This committee ensures compliance with The Americans with Disabilities Act (ADA)  which was signed into law on July 26, 1990 and was amended most recently in January 2009. The ADA is a wide-ranging civil rights law that prohibits discrimination based on disability. Disability is defined as "a physical or mental impairment that substantially limits a major life activity," such as walking, seeing, hearing, breathing, thinking, socializing, and working, for example. The ADAAA includes a list of impairments to major life activities. For more information about what the ADA says, go to the ADA website.

The Pueblo ADA Advisory Committee serves as an active resource to the City on issues affecting people with disabilities. It is empowered to:

Settlement Agreement
The United States Department of Justice and the City of Pueblo entered into a settlement agreement after a compliance review under title II of the Americans with Disabilities Act. The review was conducted by the Disability Rights Section of the Department's Civil Rights Division and focused on the city's compliance with title II requirements.

Apply for this Committee

Do you think you'd be a great addition to this Committee?  Apply here.

This Committee has  up to 15 members, no fewer than 51% must be people with significant disabilities and may include the parent or guardian of a child with disabilities.  May also include someone with direct, detailed knowledge of ADA accessibility guidelines and requirements or other disability-related legislation, may include builders, contractors, or people from other professions who are directly involved with implementing ADA standards.