INTRODUCTION
The City of Pueblo and partners conducted an architectural building survey and historic narrative of Downtown Pueblo. The focus begins in 1870 with the incorporation of the Town of Pueblo. From 1890 until 1915, the business district takes shape with iconic architecture. Commercial development evolves through the 1960s.

The architectural building surveys identify and evaluate important Downtown Pueblo resources within the narrative context of historic periods. This will educate our community on the City of Pueblo's commercial role as a Southern Colorado Front Range community with strong ties to its industrial past.

In 2017, the City of Pueblo completed part 1, which documented 154 buildings on 149 sites. It resulted in 124 reconnaissance surveys and 25 intensive surveys. Also available is the 84-page historic narrative of Downtown Pueblo, which indicated a core historic area, but further research about the commercial development was necessary to complete the picture.

The part 2 project occurred during 2019-2020, which included 15 more properties featured with an intensive level survey. An additional contextual report focused on the commercial development of downtown, with histories for influential persons, events, and changes to significant buildings.

We cultivated an understanding of Historic Downtown Pueblo in ways important to property and business owners. We will continue to involve them by promoting ways historic preservation can be a tool for economic development.
DOWNTOWN PUEBLO PROJECT AREA
A vital historic area was identified around the downtown core, generally between Santa Fe Avenue and Court Street and between City Center Drive and 7th Street. The overall survey area extends generally from City Center Drive north to West 11th Street and from North Albany Avenue west to North Greenwood Street. 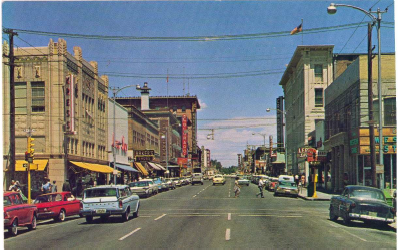