After almost 18 months the Pueblo Modern project was finished in early 2012. Titled: In Pursuit of the American Dream; Pueblo in the Modern Age 1940-1982 the results were presented February 16, 2012 at the Sangre De Cristo Arts Center. Funded by a grant from the State Historical Fund and Historic Pueblo Inc, managed by the City and conducted by architectural consultant Historitecture, Pueblo Modern is a detailed historical introspective of the 1940-1980 period in Pueblo. The study wraps up the city's Neighborhood Heritage Enhancement Program (NHE): One City, Many Stories program which conducted neighborhood historic contexts for almost every area in the city via grants with no cost to the city. 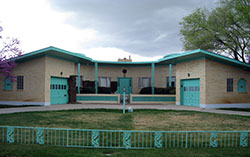 Pueblo Modern covers the history, politics, architecture, and economy of Pueblo and at 200 pages is only the initial 'story' of this time period. Pueblo's industrial working class Mid Century Story is fascinating, complex and more than any other historical period sets the stage for the city we experience every day. The study revealed details about distinctive Pueblo architectural trends and showcases a strong recent past of proud accomplishments and near misses.
Historitecture also unearthed tremendous information on odd and unique aspects of Pueblo's history such as 'Lopped Houses', Neo Adobe homes, and numerous downtown revitalization plans. Strong sections on the role of emerging Hispanic leaders in Pueblo are also included. Pueblo Modern will be used to guide future presentation and planning efforts in Pueblo and hopefully will be expanded by later scholarly, or citizen lead, projects.

The report also contains a style guide to help identify your home or business, and a Preservation Action Plan which recommends further citizen lead studies or initiatives. No formal action is being taken by the city nor landmarking, only creating appreciation and awareness of Modern historic resources, and acknowledgement of our rich recent past. Pueblo Modern was presented February 16, 2012 at the Sangre De Cristo Arts Center Jackson Conference Center by Adam Thomas.  The presentation was free, and there were door prizes including winning a copy of the study. The city expected visitors to come from as far as Denver and Colorado Springs to hear the presentation. Copies of the study were made available to all the local library branches and presentations were given again in the spring by city staff at local library branches.