The Growing Need for Mass Transportation

With the growth of the city, as in many earlier communities, a need for mass transportation was realized. This need was fulfilled by the Southern Colorado Power Company in 1949. The early form of mass transportation was an electrically powered street car on a fixed-rail system. It was replaced in 1947 and early 1948 with a fleet of diesel buses. Then, in 1949, a group of New York investors formed the Pueblo Transit Company and purchased the rolling stock from the power company. In 1956 local citizens acquired the assets of these New York investors and formed the Pueblo Transportation Company, a Colorado corporation. 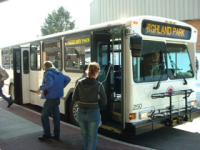 After several years of operation, the Pueblo Transportation Company made application to the Colorado State Public Utilities Commission and the City of Pueblo for the right to abandon and liquidate the corporation. This was necessary due to the declining patronage and increasing costs that were prevailing during the late 1950s.

In December 1968 the Pueblo Transportation Company notified the city it would no longer continue under the present agreement. The City Council then authorized the acquisition of all assets of the company and approved a management contract for the continual operation of the now publicly owned mass transportation system.

In January 1969 a Bus Study Committee - consisting of the city manager, traffic engineer, planning and development engineer, and the finance director - was appointed. This committee served as a continuing vehicle for the updating and improvement of the bus system.