A Long and Colorful History

The City of Pueblo has a long and colorful history dating back to 1842, when it was called Fort Pueblo. What brought our city from a small fort in southern Colorado to the backbone of Colorado were the ore mines. This area once housed 4 separate towns, which are Pueblo, South Pueblo, Central Pueblo, and Bessemer. These 4 towns together now make up the City of Pueblo. 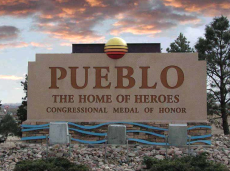 The City of Pueblo is also known as the “Home of Heroes”. This moniker was in a speech in 1993 by then Colorado Representative Scott McInnis as he spoke to Congress about the uniqueness of a city Pueblo’s size having a record four recipients of the Medal of Honor claiming Pueblo as their hometown: William J. Crawford, Army WWII; Carl L. Sitter, Marines Korea; Raymond J, “Jerry” Murphy, Marines Korea; and Drew D. Dix, Army Vietnam. At the time, all four men were alive. The speech, which became part of the Congressional Record, caused the City to adopt the name “Home of Heroes. It has increased in popularity over the years. In September of 2000, a memorial was created with four larger than life size bronze statues representing Pueblo’s four recipients and it included large granite plaques as backdrops at the Memorial with the names of all Medal of Honor recipients since Civil War times when the award was first conceived. This was unveiled in downtown Pueblo at the Pueblo Convention Center during the Congressional Medal of Honor Society’s national convention.

About the Official City Seal

The flags in the city's official seal, which fly above the banner "under 5 flags," represent the 5 countries and territories that held dominion over the Pueblo area during the last 2 centuries. Those countries are France, Mexico, Texas, Spain, and of course, the United States of America. 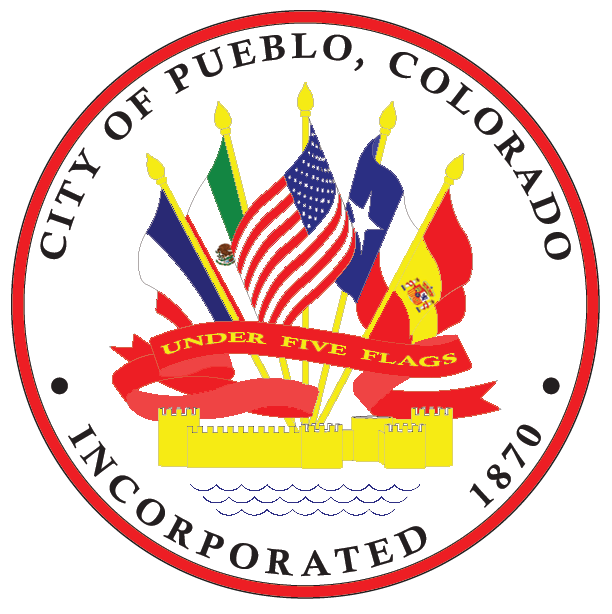 Included in the seal is a representation of old Fort Pueblo, the 1st permanent structure in the area. Pueblo was incorporated in 1870, at the confluence of the Arkansas River and Fountain River. The waters of these 2 rivers are represented by the waves beneath the fort.

Pueblo has always been a major part of Colorado history. At Pueblo’s start it was just a small fort; however, it was instrumental in bringing the railroad to Colorado. A major part of Colorado is the rich diversification of agriculture. Pueblo has been instrumental in encouraging and rewarding the agricultural history of Colorado through hosting the Colorado State Fair. The Colorado State Fair began October 9, 1872. It was held by Southern Colorado Agricultural and Industrial Association, which received no cash assistance from the community or the State.

The Colorado State Fair was incorporated on November 17, 1886. After becoming incorporated, the Fair purchased fifty acres of land for 3,000 dollars and made improvements of 5,000 dollars. The land was located near Mineral Palace Park. The fair remained at Mineral Palace Park until 1890 when the board moved the site to 100-acres of land that was located west of Lake Minnequa. The board purchased the new site for 30,000 dollars and sold the Mineral Palace Park location for 48,000 dollars. This was a 40,000-dollar profit in only four years! The Fair only stayed at the new location for 11 years before it moved to its present day site. The first structure on the present site was the Mexican Pavilion. When the Mexican Pavilion was first built it doubled as the police headquarters for the City of Pueblo.

Presently there are fourteen structures all with historical significance. Besides all of the location changes, there have been many changes in administration and funding throughout the Colorado State Fair’s history. The fair administration began with a non-profit group of Pueblo citizens called the State Fair Association. In 1903, the State Fair received its first state appropriation. Then in 1917 the fair received a State Fair Commission.

The deed to the land was given to the State and the fair received its first levy of .01 million dollars for operation and maintenance. Today the Colorado State Fair resides on 102 acres of land that contains paved streets and impressive landscaping. The fair has been host to countless celebrity concerts and used throughout the year for community events. Every year there are new activities and educational opportunities for Colorado citizens and visitors to enjoy. The fair has been a focal point for the Pueblo community and will hopefully continue to be one well into the future. For more information on upcoming events visit the Colorado State Fair’s Website at http://www.coloradostatefair.com

One of the most well known natural disasters in Pueblo’s history is The Great Flood of 1921. While most Pueblo citizens know the story by heart, there are some things they might not know. One of the most amazing things about the 1921 flood was not the horrendous amount of damage and life loss, but the bravery and kindness of the people caught in this horrible disaster. The flood warning first came at 6:30 p.m. June 3, 1921. An unknown person called and reported that the Arkansas River was flooding upstream. The flood was caused by a sudden cloudburst on the Arkansas just ten miles west of Pueblo. The flood only became worse later on when Fountain creek also began to flood from down pours 30 miles north. When the two merged in the heart of Pueblo the results were catastrophic. Fifteen hundred people lost their lives in the flood and there was 20 million dollars in damage. The flood level was over 15 feet in some places. All of the bridges over Fountain Creek were destroyed; however, the bridges over the Arkansas remained. The telephone company had 9-½ feet of water and approximately 225,000 dollars in damage. Almost all of the downtown area was destroyed. Bravery was widespread that horrible night. The telephone operators stayed even when the floodwaters reached 9 ½ feet. They stayed and continued sending out warnings to those people who lived further downstream. They also received and relayed countless distress calls from families whose houses were trapped in the floodwaters. The operators were eventually rescued themselves and not a single operator died that night. The operators’ bravery saved countless lives. Bryan Thady was responsible for seeing the operators to the third floor.

This saved them from the floodwaters that consumed the first floor where the switchboards were. Bryan then returned to the second floor for the subscriber and the first floor for the cable records. His heroic efforts not only saved the operators, but also made it possible to recovery the telephone system after the flood. Another testament of bravery was when telephone workers went back themselves to rescue mementos. A lady came to them to ask them permission to return to her house, which had been swept into the backyard of the telephone company. Her husband was still missing and at that point was presumed dead. She wished to return for candlesticks that were a wedding gift. The men went back into her house themselves and sifted through the debris until they found her candlesticks. They eased her distress by their simple act of kindness. One of the citizens of Pueblo’s neighbor, Denver, came to help rebuild the telephone system. His name was Abe Maiman. He arrived three days after the flood after a long trip because of the train tracks destruction.

When he arrived the smell of rotting bodies (both animal and human) greeted him. There were no utilities and disease was running rampant. The water had to boiled to be usable and the hospitals were already full and out of medicine. In spite of all these hardships he stayed and worked until he dropped. All the workers literally worked until they dropped. When they dropped the other workers would just leave them, pick up their tools, and continue the job they were doing. His first shift he worked 48 hours straight. He was just one of the many remarkable workers. The relief effort was remarkable.

The community banded together. Before the Red Cross arrived. The Elks Club served as a relief center where three thousand refugees were served a day, until additional help arrived. Fellow citizens also built a camp to shelter the refugees. After a few days additional helped arrived from the Red Cross, Salvation Army, Knights Columbus, and military units. Pueblo was under federal control temporarily to restore law and order. With all the heroes that emerged and relief organizations that came to aid Pueblo’s citizens, the City of Pueblo was up and running again in record time. Pueblo had made quite a rally by 1924, only three years later. Pueblo also established a committee of three men that oversaw the planning and implementation of a flood control plan. Their effort was to help prevent a reoccurrence of this disaster. To this day the flood of 1921 is the largest, most devastating flood in Pueblo history.